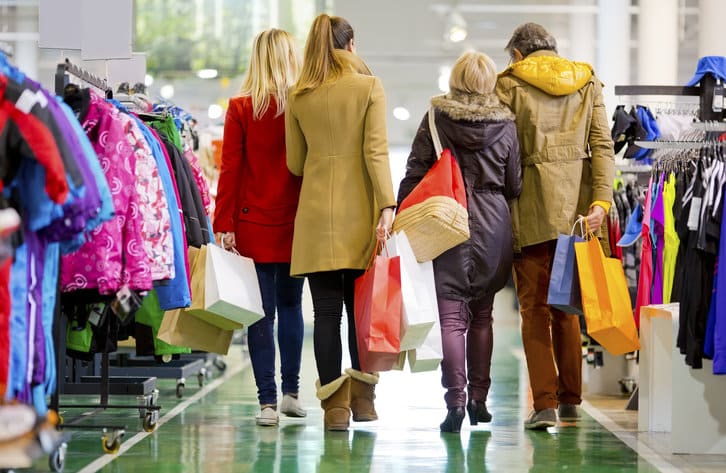 You are in Madrid and want to go shopping. For whatever reason (perhaps because it is a cold or rainy day, or because you prefer to do your shopping in a place where there is a large concentration of stores), you want to go to a shopping mall. ¡ There are many of them in Madrid! Some of them are located on the outskirts of the city, but many others are either in the heart of the city or in places that are very well connected by metro or bus. Here we list the most easily accessible ones!

So we thought it would be a good idea to leave here a list of Madrid’s shopping centres that are closer to the centre and easier to get to. Let’s go!

A shopping centre in an old 19th century railway station that’s been converted into a place for shopping and leisure. It’s the most accessible shopping centre in Madrid, just a 15-minute walk from the Royal Palace and Plaza de España.  Both its interior and its wrought-iron structure are worth seeing, although it’s a shopping centre where we find fewer shops than those pictured below. Of course, the gastronomic offer is great and the cinemas (cinesa) are fantastic: they’ve 9 different halls, one of which is equipped with surround sound.

WOW is no ordinary shopping centre. Located in the heart of Gran Via and in the building that used to house the Hotel Roma (on the dome of the building there’s a statue of Luperca, the she-wolf from the capital), WOW is conceived as a kind of multi-brand, multi-product department stores’ where we can find hundreds of items and clothing brands that originated on the Internet, complemented by a very innovative gastronomic and leisure offer. WOW offers a unique and different shopping experience, both physical and digital.

On more than 5500 square metres and 8 floors, WOW offers a frequently changing and exclusive selection of fashion, decoration, beauty, technology, design, leisure and gastronomy as well as “gaming” rooms (online video games), a cooking school, a gym, a photo call for “Instagrammers”, a digital museum and even a cafeteria where the waiter is an articulated robot.

Although it’s a little further from the centre than the other suggestions on our list, a visit to the Plenilunio shopping centre is the perfect excuse to also go to the Park of Capricho (Whimsy), which is right next door. It was built between 1787 and 1839 for the Dukes of Osuna and is only open on weekends and public holidays. It’s one of the most beautiful and unknown parks in Madrid (especially its Civil War bunker). Plenilunio is a large shopping centre that houses a variety of shops common to this type of space: H&M, Zara, Bershka, Stradivarius, Pull&Bear, Springfield, Blanco… And a Primark, which is the second largest in Spain (after the one on Gran Vía).

On the top floor there’s a wide range of restaurants and entertainment options (fast food chains, restaurants, cinemas and a 32-lane bowling alley). If you want to relax after an intense day of shopping, you’ll also find one of the largest and biggest urban spas in Europe (more than 4500 square metres). It’s accessible by metro and has free underground parking.

Did you know that Madrid has a river? We all know that “there’s always life near the river” and Madrid will be no less so. Plaza Río 2 is the newest shopping centre in Madrid, opened in 2018: 3 floors, many shops (including FNAC, Zara Home, Victoria’s Secret, Armani Exchange, El Ganso, Jack & Jones, Adidas or Tous) and a terrace for leisure and gastronomy.

From the terrace you’ve a very good view of the river, the surrounding park and the Matadero (a cultural centre that we highly recommend visiting). The Matadero (a group of neo-Mudejar pavilions built at the beginning of the 20th century as the city’s slaughterhouse) is a cultural reference not only in the neighbourhood, but in all of Madrid. Here you’ll find temporary exhibitions, the Casa del Lector, a film library, a theatre, two bar-restaurants, a centre for artists’ residences and a central square where a variety of events take place (including the Producers’ Market every third weekend of the month).

Just 30 minutes from Madrid Centre, we find some of the “shopping destinations” of the Bicester collection (like La Roca Village in Barcelona, Bicester Village in London or La Vallée Village in Paris). It’s an outdoor outlet centre: a village that houses more than 100 shops of national and international brands. With its streets, trees, cafés, cinemas, squares and fountains. Las Rozas Village is the place to find bargains and good prices. Branded products are reduced by up to 60% of their original price all year round. There’s always a sale here. Shops include Chloé, Ferragamo, Kenzo, Sandro, Hugo Boss, Scalpers, Roxy, Montblanc and Karl Lagerfeld. 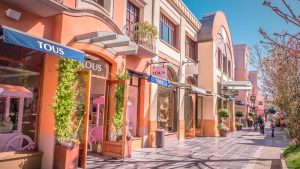 Here you can buy products from well-known brands at a much lower price than in other shops. It’s also located on the slopes of the Sierra de Madrid and is a great place to relax with a coffee or lemonade and watch the sunset after shopping. Until a few years ago, the village of Las Rozas chartered a bus to take us from Plaza de España to the door of the enclosure. Today they don’t do that anymore. If you don’t have a car, the easiest way is to drive to the Moncloa interchange and take the 628 bus from there, which also drops you off outside the entrance. What else they offer are prepaid cards at 50€ and 100€, which include an additional 10% discount in all shops and a drink.

The first shopping centre to open in Madrid, it’s “recycled” over time to avoid becoming obsolete and remain the favourite shopping centre of many Madrid residents. It’s more than 85000 square metres and 247 shops, cinemas and restaurants. Among them, a branch of Aliexpress. It’s also a familiar and ideal place to go with children. There are many facilities especially for children, including a playground where they can do many activities and a park.

In 40 minutes from Puerta del Sol and without changing trains, we arrived at the Gavia. Located in the Ensanche de Vallecas (a working-class neighbourhood south of the centre), it’s a total area of 110,000 square metres dedicated exclusively to shopping, which earns it the title of the largest shopping centre in Madrid. It’s the largest Carrefour hypermarket in Spain, IKEA, FNAC, 3D cinemas, free parking and wifi, a post office and a Primark. There’s simply everything.

First of all, it’s worth approaching this shopping centre, if only for its magnificent brick and tile façade and for the area in which it’s located: the elegant Salamanca district. Salamanca is one of Madrid’s most important neighbourhoods, both because of the particular layout with which it’s built (similar to Barcelona’s extension, the Eixample, this neighbourhood is conceived as a regular grid formed by the longitudinal axes of its streets) and because of its famous inhabitants. The precursor who gave the neighbourhood its name was José de Salamanca y Mayol (Marquis of Salamanca), a native of Málaga, who planned a new district of elegant and well-kept buildings for the aristocratic and wealthy classes of the city.

It seems to us the least interesting shopping centre on the list, because it’s small and has a limited offer (we find mainly exclusive brands), but it’s the peculiarity of being in the same centre and housing the Sweet Space Museum and the Robot Museum (both very interesting for children and young people).

Madrid and its surroundings have many shopping malls and some are easily accessible by public transport.