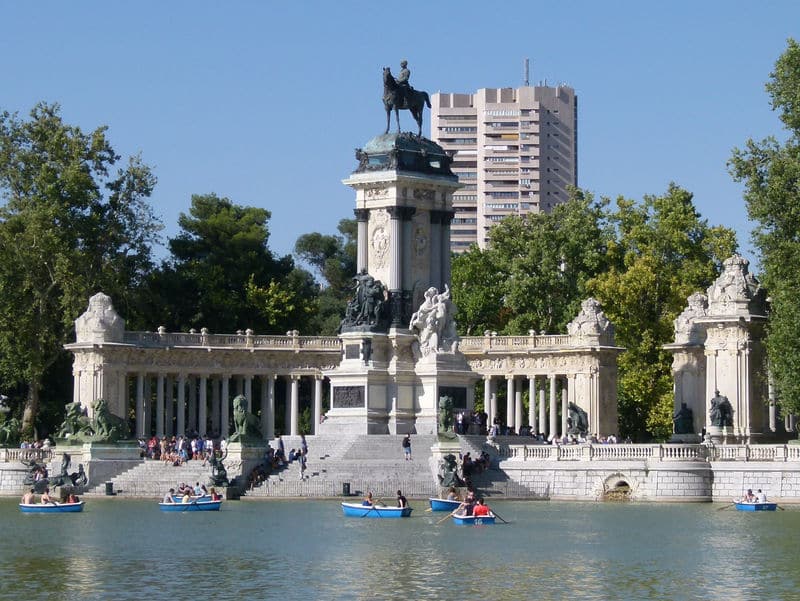 If there is a place that brings together Madriders and visitors, it is the Retiro Park. Parque del Retiro is the lung of the center of Madrid.

The Retiro Park is the most beautiful park in the capital. Although it is not the largest, it is the park that we recommend you to visit first.

The Retiro Park is a place full of history.

The Retiro Park was once the royal garden of the old Palacio del Buen Retiro,built by the kings of Spain in the seventeenth century as a place of spiritual retreat, rest and vacation.

The Old Palace of the Good Retreat

Unfortunately, most of this palatial complex has not come to this day. It’s funny that the garden has survived the best.

The gardens were opened in 1630 and although at first its use was reserved for members of the royal family,the park gradually opened to the rest of Madridands and in 1868 became one of the most beautiful public parks in Spain.

How big is it? What are you going to visit?

The Retiro Park has 125 hectares and more than 15,000 trees. You will find very different environments and areas: from French flower parterres to more forested areas,to green areas or Japanese-style gardens.

How do I get to The Retiro Park?

We recommend walking to the park. The walk it’s worth it. If you prefer to do it by metro, the nearest stop is Del Retiro (line 2,the red one) that you can take to Puerta del Sol. The other nearest lines are Ibiza (line 9), Serrano (line 4) and Atocha (line 1). 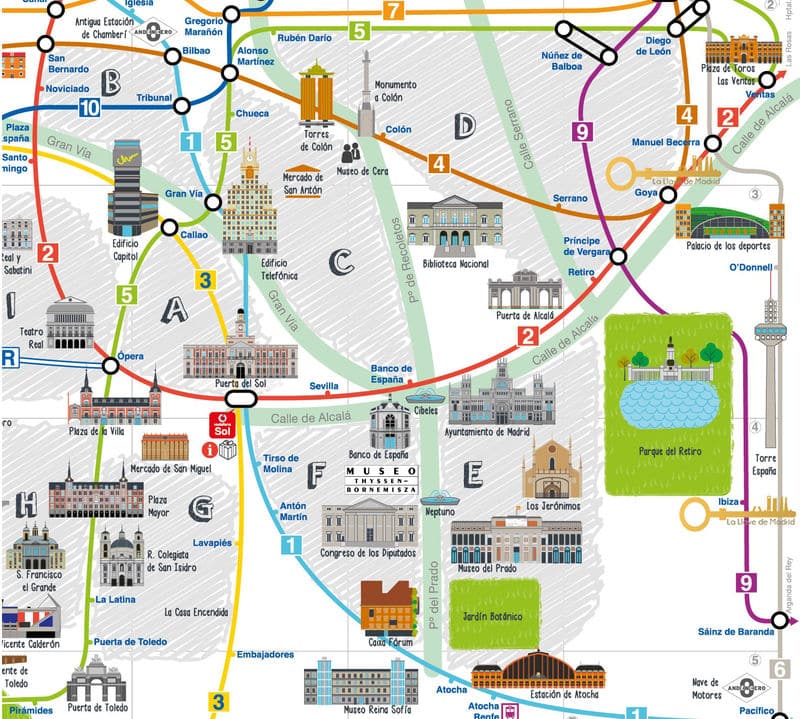 The park has several gates and is accessible from all the surrounding streets, although we recommend that you enter or exit at the entrance of Philip IV (the one in front of the Palace of The Good Retreat). The Baroque-style door on which the year of construction is engraved, gives access to the park through the parterre of Philip IV, which is possibly the most beautiful French garden in the park.

How much does it cost to enter The Retiro Park? What are the schedules?

Although it’s fenced in, The Retiro Park is a free public park. The park opens at 6 a.m. and closes at 12 p.m. (in winter at 10pm) . Attention! In the park, there are two gardens that have their own schedule. We’ll talk about them below.

The park is crossed by wide avenues that will facilitate your orientation, although – if you have time – it can be fun to get lost among the small winding paths and discover the places at random.

What to see in the Retiro Park?

The so-called large pond is one of the oldest monuments in the park. It was built in the early seventeenth century, was the heart of the palace garden and has served to host water shows such as recreations of naval battles (naumaties) and also boat rides of the Kings and their court.

Today, the pond avenue is filled on weekends by musicians, street performers and stalls of all kinds. You can sit on the stairs of the monument to Alfonso XII to sunbathe, have a coffee on one of the terraces or even rent one of the boats to relax adrift.

There are a lot of anecdotes about The Retiro Park, however, we want to share one in particular. Did you know John Wayne was in the pond? Inside, we mean. It was 1963 for the filming of the film «The Fabulous World of Circus» with Rita Hayworth and Claudia Cardinale. The pond had to be emptied because the production decided to install the load of actors at the bottom of it.

It is one of the best examples of what was called iron architecture and was built on the occasion of the Philippine Islands exhibition in the late 19th century. It worked as a greenhouse of it. Today it is home to the Reina Sofia Museum and hosts temporary installations of modern art. Access is free of charge.

The Palace of Velázquez does not nothing to do with the painter of the Meninas but with the name of its architect: Ricardo Velázquez Bosco, also author of the Crystal Palace. Also built in the 19th century onthe occasion of an exhibition, this time the National Exhibition of Mines, the palace is a clear example of the Arabic influence on Spanish architecture. 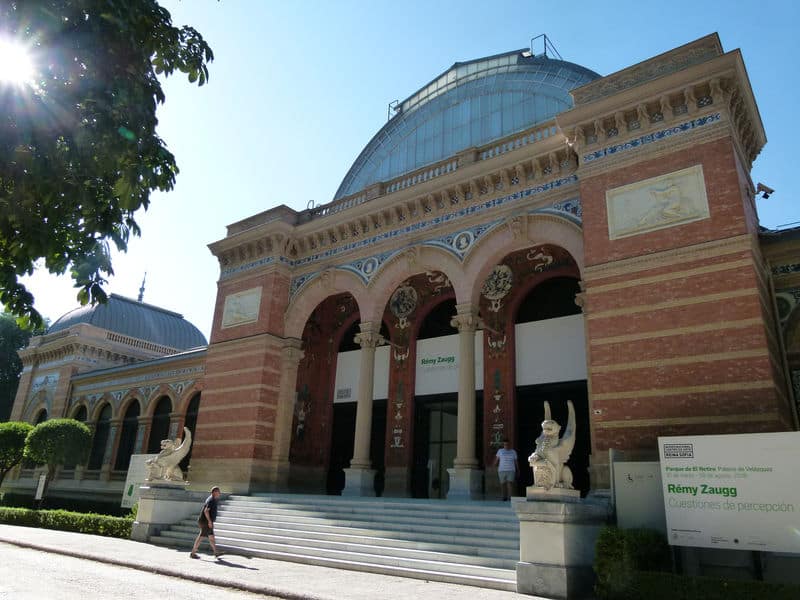 The Fallen Angel or the Devil’s Statue

The fallen angel is practically the only sculpture in the world dedicated to Lucifer. This sculpture, created by a renowned Madrid sculptor, was the winner of a competition organized by the Museum of Fine Arts of Madrid and acquired by the City of Madrid to be finally exhibited at the Retreat. 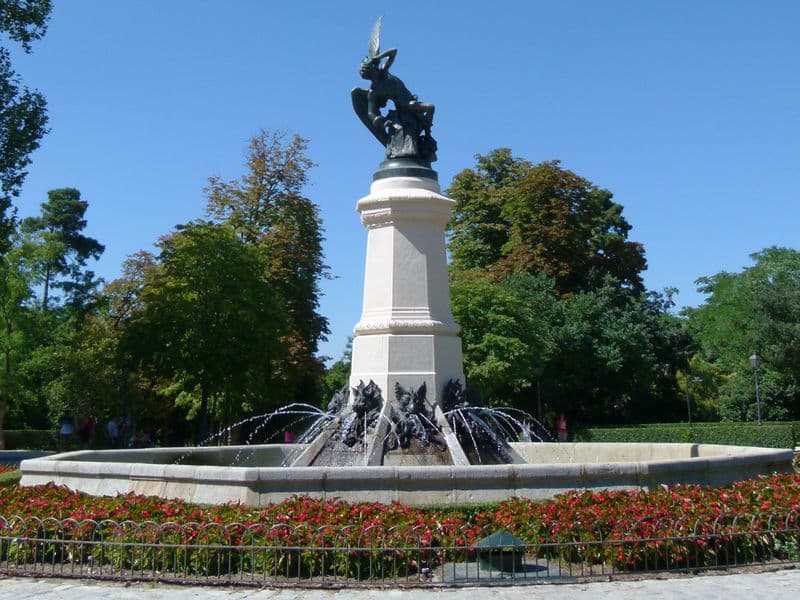 In our opinion, the Galapagos Fountain is the most beautiful source of the Retiro Park. It was built in the early 19th century by King Ferdinand VII to commemorate the first anniversary of the birth of his daughter Elizabeth II.

The fountain’s three fairies bestowed their vows on the princess and sculptural elements represent desires for the future queen:children-mounted dolphins are associated intelligence, wisdom and prudence. Marine elements are related to fertility – since water has brought life into life – and Galapagos turtles are symbols of longevity.

The Forest of Memory

This small mound is one of the most recent parts of the park. It was inaugurated on 11 March 2005, just one year after the sad attack by Atocha in honour of the victims of terrorism and those killed in this tragedy.

If the Retiro Park is already a quiet place in the bustling center of Madrid, Cecilio Rodríguez’s gardens are synonymous with calm and tranquility, perhaps because they are in the last and least known part of the park and in its least visited part. 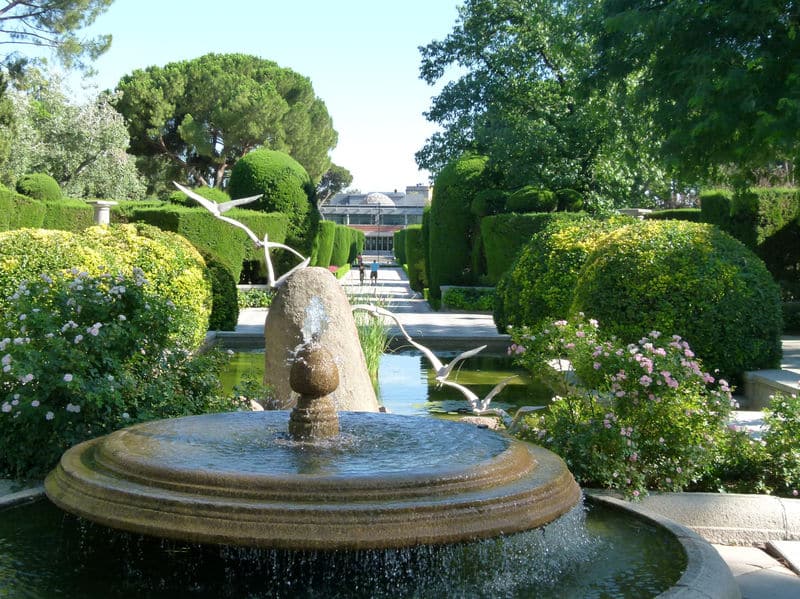 The Garden of Roses

The Retiro Rose Garden is one of the two rose gardens that Madrid has, it is not the largest but it is the most beautiful and, by its location, the busiest. It consists of about 4000 roses arranged in flower beds and was built in the early twentieth century by those who considered themselves the best gardener in the city: Cecilio Rodríguez (also designer of the gardens that bear his name).

Did you know that? Cecilio designed other similar European gardens, including the Boulogne rose garden in Paris, from where he brought the first seeds. Therefore, most varieties of roses are French.

The Walk of the Statues 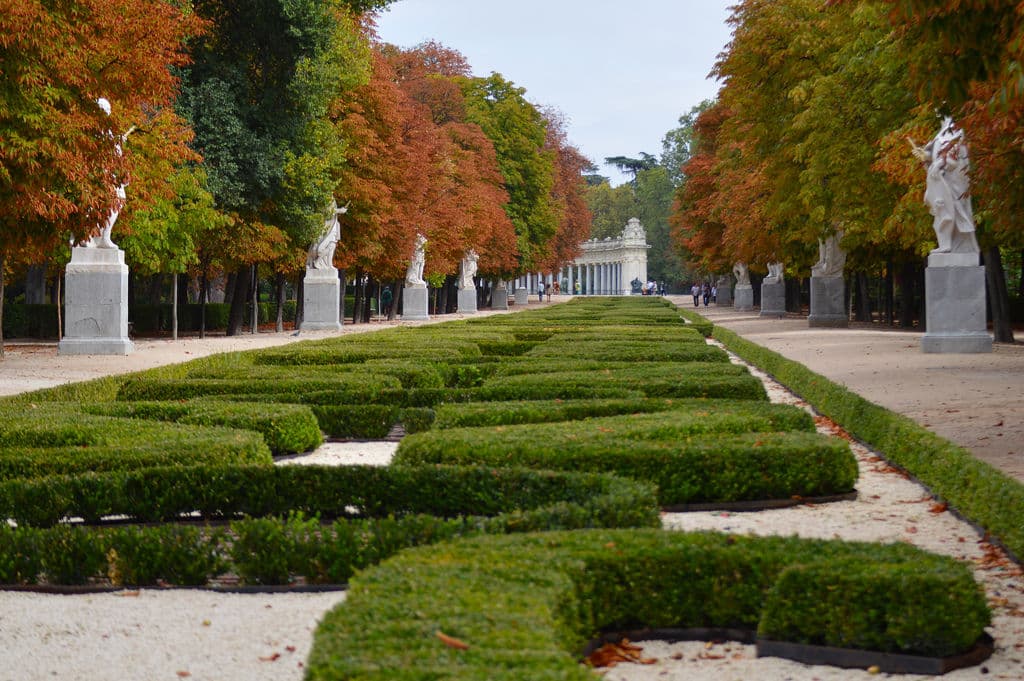 The statues were commissioned by the kings to be part of the decoration of the Royal Palace and be placed on their shelf, something that could not finally be done due to their excess weight. Since then, they have decorated the Retreat, the Plaza de Oriente and the Sabatini Gardens.

The House of Beasts or the Ancient Zoo

We know that in terms of architecture and tourism this part of the park does not have as much interest as the others, however it is interesting for its history. Fue the Zoo of Madrid from 1780 until around 1970,when the animals (it was about time!) were moved to a different place and especially in better conditions.

The moat of the monkeys, the cave, the pool of the penguins … See this brick building? Today it is a public library. It was where the beasts were! The bottom keeps the original grilles from which you could see lions, tigers, jackals and hyenas.

It doesn’t look like a big zoo, but there were more than 600 animals, including elephants and giraffes. We are happy to have this little piece of history here at the Retreat, but we are especially happy for the animals, as their living conditions here were appalling.